Chris Sutherland is Director of The Kitchen Company, “Since 1985, we have built our award-winning business on recommendation, reputation and our total commitment to exemplary service.

By providing stunning designs at realistic prices, we’ve earned the loyalty and respect of our many satisfied customers – some of whom are on their fourth Kitchen Company project.

The 1980s was a period of economic volatility. There was a deep recession in 1981 as the government tried to control inflation. Unemployment did not fall until the mid and late 1980s when the economy boomed during the “Yuppie-years” of rising wages, rising house prices and a stock market boom.

In 1983 Chris applied for a job as a kitchen designer with a company called Paynes who were based in Hayes, Middlesex. Retailers of fine china and glassware, Paynes had recently begun to sell kitchens under the brand ‘The Kitchen Company’. It was here that Chris met Terry Stubbs, a fellow kitchen designer with a love for Elvis and John Toomey, a first-class kitchen fitter.

After around 18 months of working together, these three young men decided that, together, they wanted to set up their own kitchen company.

Chris says “We had decided to tell our bosses on a Monday morning that we were going to be resigning from our positions to start up on our own. On that very Monday morning, as our nerves developed, we were shocked when our bosses at Paynes called all three of us into a meeting.” 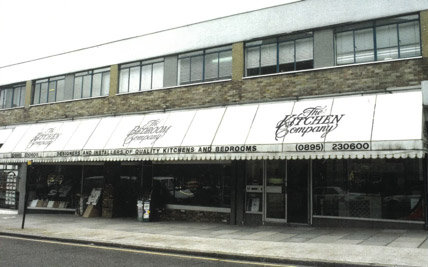 It transpired that Paynes was in financial difficulty, due to a bookkeeper taking a considerable amount of money, and the company was to close. “We were told that we were all to be made redundant. We decided to tell the owners of Paynes of our plans and they came up with an exciting proposal. We would complete any kitchen jobs that were outstanding and then could, temporarily, run our own business from their premises in Hayes, which was very decent of them” says Chris.

In 1985, having purchased the name ‘The Kitchen Company from Paynes for £1, and using the funds from their redundancies and the going concern generating income from the Paynes premises, the three partners found new premises at 27 Belmont Road in Uxbridge, where the business still trades from today. Continued success has seen the business expand over the years into the adjacent premises at numbers 21, 23 and 25 to create the impressive modern showroom that we see today.

The three new partners agreed their plan for The Kitchen Company was to create and sell high-end, top-quality kitchens whilst offering an unrivalled service to their customers. “In those days, customers would have no concept of how their completed kitchen would actually look. Believing this to be a vital part of our service, and giving us a huge advantage against our competitors, we employed artists who produced 3D detailed drawings on A1 art paper which they would colour with paint and which we, in turn, would present to our delighted customers as a painting. This was unique at the time and many of our customers still cherish these paintings” says Chris.

In 1987, with business trading well and with transactions growing rapidly, John Toomey decided to go in his own direction and left the partnership, leaving the two partners Chris and Terry Stubbs.

Due to the sad and sudden deaths of two of their highly talented artists, The Kitchen Company moved to utilising new technology in the form of an ‘artists robot arm plotter’. “We had two artist plotters that sat in our shopfront windows constantly scribbling away, which people would stare at in amazement. 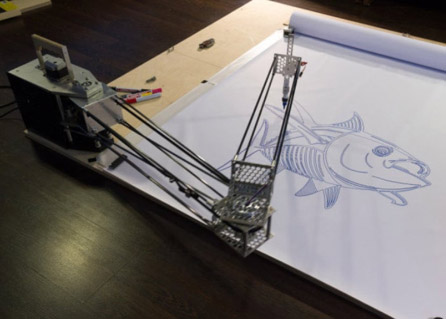 At this stage, we also introduced new automated computerised technology called ‘Package Planet’ to produce our detailed kitchen design artworks. This element of design and technology certainly made our business stand out further from the rest!” 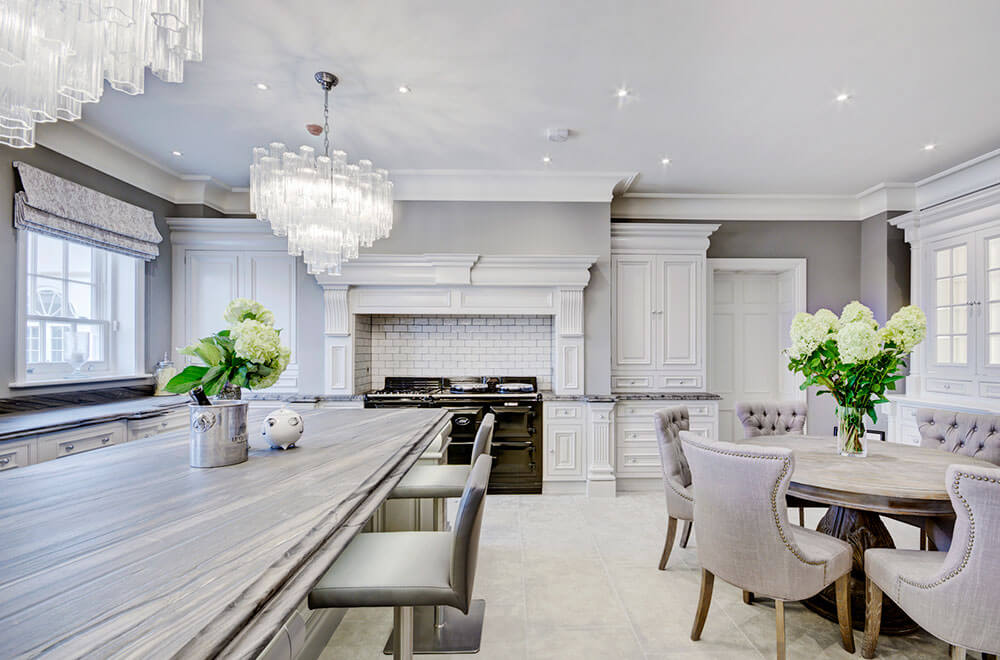 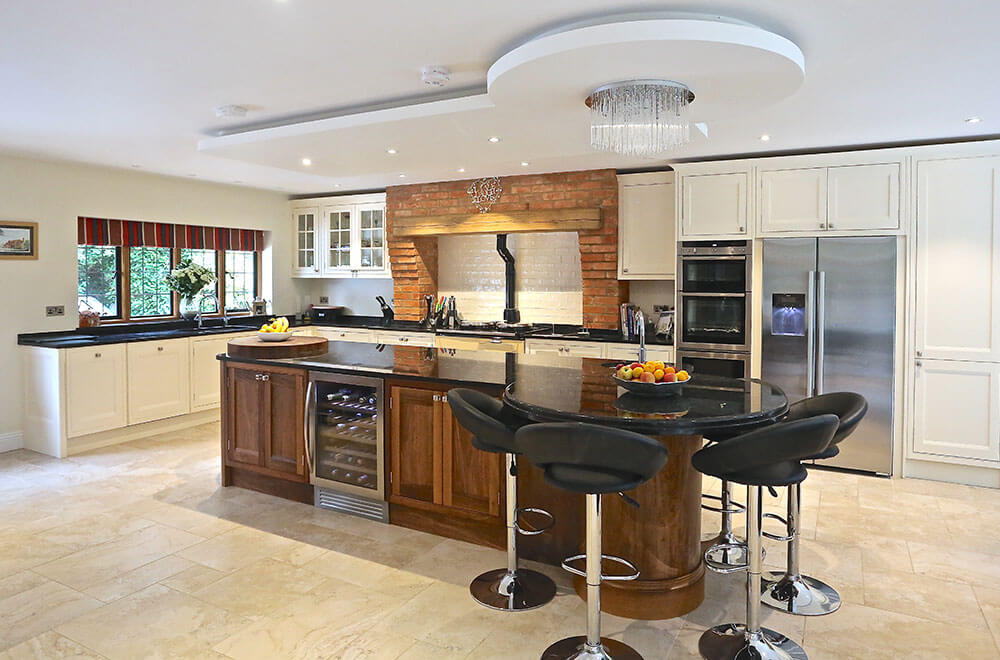 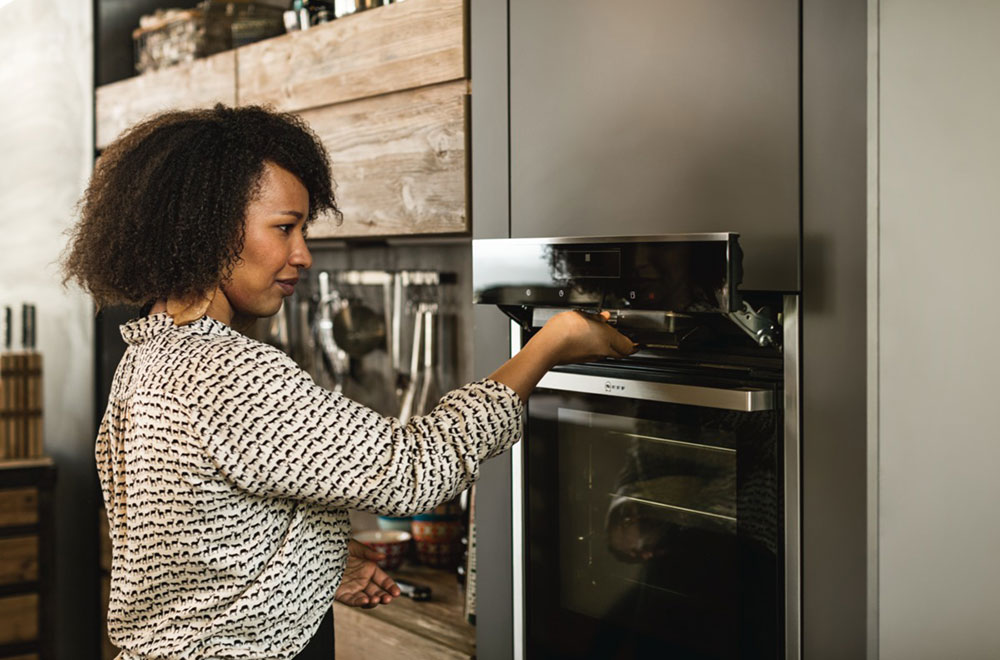 Chris admits that it was a little daunting working on his own at the outset but, quickly set about transforming the business. “To understand where the gaps and opportunities in the market were, I started by conducting a fair amount of market research. It was important to me that we continued to have a unique proposition to offer our clients within a fast-changing market.”

This research led Chris to change his mind on some of his original plans. “I had considered ceasing the building related aspect of our service but discovered that other kitchen companies were not offering a complete service. Nobody was providing brickwork, plumbing, tiling and electrical services; most companies required the customer to project manage these services which can prove difficult and expensive. Still today, we offer the complete service to our customers, project managing the entire job from start to finish”.

Chris also discovered that his competitors didn’t supply drawings, a unique service that The Kitchen Company continues to do today. “We present the kitchen design drawings to our customers with every quotation. It is incredible and humbling to see drawings that we have created in the homes of customers, some created over 30 years ago but are still in pride of place and cherished.”

Payment was another area of innovation. Payment for services from The Kitchen Company are made in three parts by the customer, whereas other kitchen companies request a full payment in advance of works. “Investing in a high-quality kitchen can be a considerable expense and offering payment terms in this way allows our customers to budget and plan more effectively”.

These core elements remain prevalent in The Kitchen Company’s ethos, and all remain differentiators to their competitors. Today, they offer an outstanding range of high-quality bespoke kitchens and bedrooms from premium suppliers including Daval Kitchens, Edwin Loxley, Schüller Kitchens and kitchen units engineered by Hacker that are designed by The Kitchen Company themselves.

Chris also undertook a re-modelling of the showrooms, removing the old-fashioned traditional design shop fronts with modern flat glass window facias that allowed the kitchen designs to be displayed in an expanded and modern showroom. This important change not only elevated the aesthetics of the showrooms, but also gained enough space for two new kitchen displays. The decision to change the facias of the showrooms was not without risk as planning permission took time to be granted and Chris took the decision to progress the remodelling without this being in place at the time. “Sometimes you have to take a risk in business.”

The Kitchen Company has impressively achieved year-on-year growth each year post the 2008 recession and, remarkably, has never borrowed any money. “Last year was difficult due to the national lockdown, however, this year looks much more promising. People are now investing heavily in their homes and leisure spaces as we adapt to the new normal. Today, the kitchen is seen as a ‘zone’ incorporating living and dining in an open plan space that the whole family congregates in and enjoys. Our range of home office workspaces are also proving to be very popular as more and more people continue to work from home.”

Looking To The Future

Award winning, The Kitchen Company is now a brand, synonymous with quality and service and is often promoted as a selling point by a number of leading local Estate Agents.

As one of the premier suppliers of kitchens, bedrooms and home offices to London, Bedfordshire, Buckinghamshire, Hertfordshire and throughout the South East, together with the odd foray abroad to clients’ second homes in France, Sri Lanka, Mauritius and St. Moritz.

The Kitchen Company guides their clients from concept to completion of projects, specialising in the supply and installation of quality furniture, appliances and accessories incorporating all the latest designs and innovations from leading German and British manufacturers.

Sterling Grove Accountants have been my accountants for over 25 years, and I must say that I continue to be incredibly impressed by their proactivity and personalised approach. Paolo and his team have come up with many fabulous suggestions over the years that have helped me to grow my business and my bottom line.

Sterling Grove Accountants are delighted to have worked with Chris and his excellent company for over twenty five years.